The Story of Poosalar Nayanar

In Faith and Devotion, Saints of India 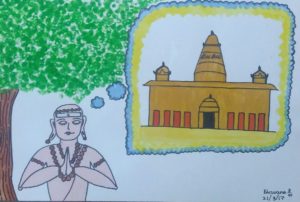 There are lots of stories in our culture about people who have lived to see God and his miracles. The following story is about one such person.

Poosalar, a poor , but educated man lived in Tiruninravur which is near modern day Chennai. He was an ardent devotee of Shiva and his most cherished desire was to build a temple for Lord Shiva. But he was a very poor man and he could not imagine building even a wall, leave alone a temple. But Poosalar’s desire only kept growing day by day. So he consulted the spiritual texts on the rules of building a temple.

There are certain rules to be followed in designing a temple and those rules are strictly followed. So, Poosalar studied all those rules and started to construct a temple in his mind. Today he would build one portion, tomorrow, another. The next day he would build the entrance and the next day the doors. He kept on building the structure in his mind like this daily, deciding the places for the deities and deciding on the sculptures to be placed.

This went on for a while and he even fixed a date for performing the “Kumbabhishekam” or inauguration of the temple. He would perform the Kumbabhishekam also in his mind.

In the meanwhile, a Pallava king named Rajasimha had built a grand temple for Lord Kailasanatha (Shiva) at Kancheepuram (near modern day Chennai). He had fixed a date for the grand inaugural of his temple and incidentally it was the same date as Poosalar had decided for his imaginary temple.

A few days before the consecration, Lord Shiva appeared in the dream of the Raja and expressed his inability to come for the consecration of the temple as he had to “attend Poosalar’s temple function at Tiruninravur” on that same day.

The king was aghast that there was another temple superior to his that the Lord himself wanted to go. The very next day Rajasimha  set out to Tiruninravur to see for himself how Poosalar’s temple was better than his. But when he reached there and enquired, he came to know that Poosalar was a poor scholar not even capable of buying ten bricks. But since Lord Shiva himself had appeared in his dream, he called Poosalar and enquired about his temple. Poosalar reluctantly told him of his imaginary temple. The king was taken aback by the sheer devotion of this poor fellow. He immediately  ordered a temple to be built at that very spot in the same design Poosalar had envisaged.

Poosalar was very grateful and thanked Lord Shiva. The temple is there still  at Tiruninravur and is named “Hridayaleeswarar” temple (Lord of the heart) aptly. The Lord’s name is Hridayaleeswarar.