From the Panchatantra – Four Friends 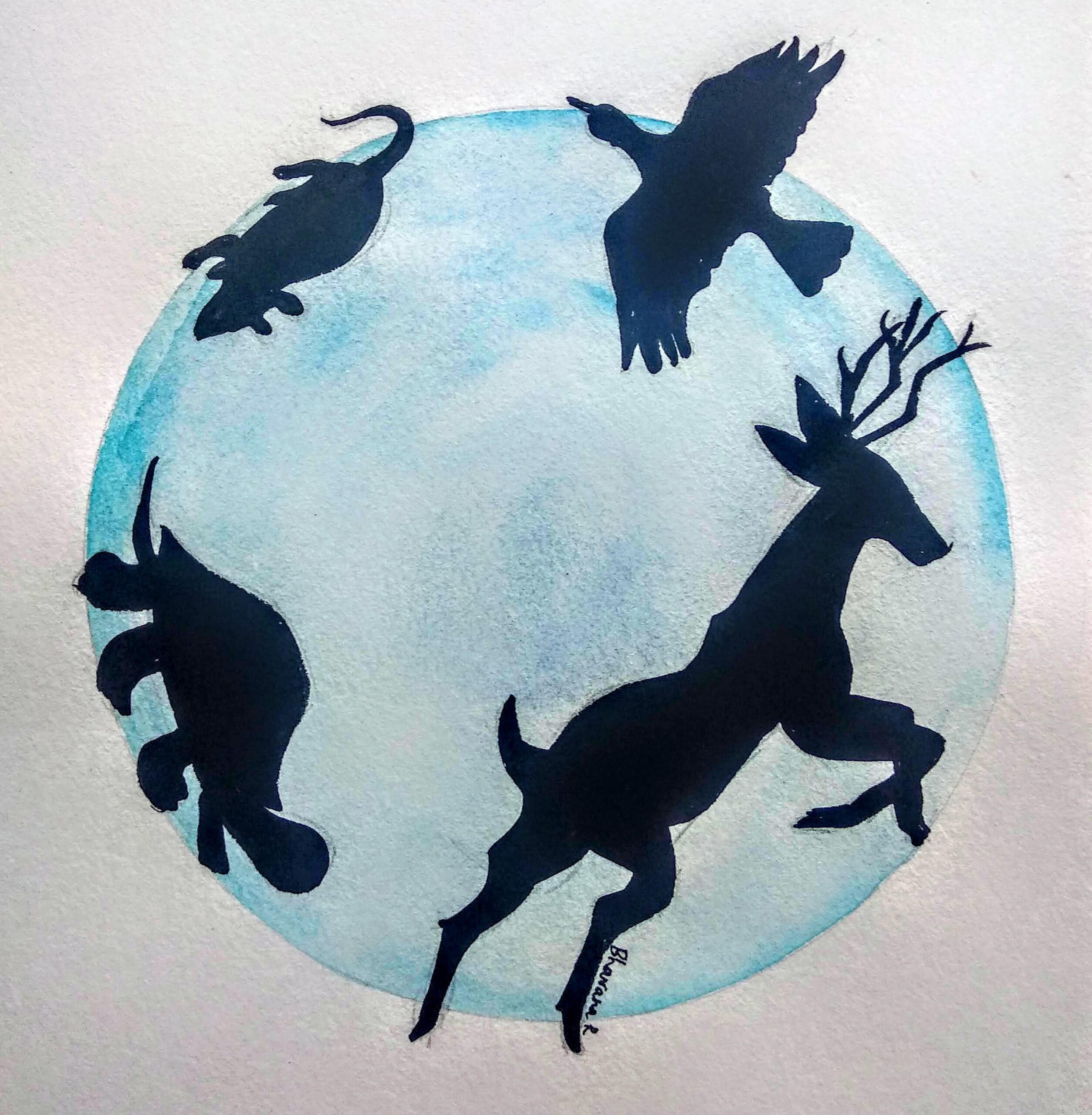 Dear Readers, A very Happy New Year to all who are celebrating New Year today all over India!

Today, I am narrating a story from Panchatantra, from the chapter Mitralabha or ‘Gaining of friends’.

There are already a few stories from Panchatantra in this website which you can locate and read using the ‘Search’ tool on the right or down below if reading from mobile.

Long, long ago in the forests of Central India, there lived four friends, Hiranyaka the mouse, Mandaraka the tortoise, Laghupatanaka the crow and Chitranga the deer. The mouse, tortoise and crow were friends for a long time, while Chitranga had joined their group recently after escaping from a hunter. However, they enjoyed the company of each other and would meet regularly near a lake in the forest to share their thoughts.

One day, when the friends were meeting at the lakeside, Chitranga did not come. Hiranyaka, Laghupatanaka and Mandaraka waited and waited but there was no sign of the deer.

The friends got worried. They thought that Chitranga might have been trapped or killed by some hunter or would have fallen into a pit made by the hunters to catch elephants.

“What do we do now?” asked Hiranyaka, the mouse.

Mandaraka, the tortoise who was the oldest of them all looked at the crow and said, “Look here Laghupatanaka, neither Hiranyaka nor I can run fast in this jungle. You, on the other hand can fly high and see things which are far away. Why don’t you fly around and see if you can spot Chitranga?”

“You are right” said Laghupatanaka. “I will fly and see and tell you.”

Saying so, he flew over a short distance looking for Chitranga. Not very far away from the lakeside, there was a clearing and there he saw Chitranga lying down, trapped in a hunter’s net. The hunter who had laid the trap did not seem to be anywhere nearby. Laghupatanaka flew down to Chitranga. Chitranga was so relieved to see his friend but was feeling so helpless that tears were flowing from his eyes.

“What should I say?” sobbed the deer. “Death is chasing me and I am happy that I could at least see you before I die.”

“Don’t lose heart my friend” said the crow. “I will go immediately and bring Hiranyaka here. His sharp teeth will cut the net in no time.” He immediately flew fast to the lakeside and told Hiranyaka and Mandaraka of the plight of Chitranga.

“Come on Hiranyaka” he said to the mouse. Climb on to my back and I will take you there fast. The hunter will come any moment and we will have to free Chitranga soon”.

“You are correct” said the mouse as he climbed on to Laghupatanaka’s back. “We, as friends should do our best to free him. Otherwise what is the point of friendship?”

The moment they landed near Chitranga, the deer felt very happy. He was so glad that he had such good friends. He realized how important it was to have good friends, and how troubles could be easily overcome with the help of good friends.

Hiranyaka asked the deer, “How is it that a clever and swift being like you got caught like this?”

Chitranga said, “Friend let us not talk about it now. Cut the net fast so that I may get out. The hunter will be here any moment. Quick” There was fear in his eyes.

“Don’t you worry my dear”, said the mouse. “My sharp teeth will do the job in a jiffy. But do tell me how this happened.”

Chitranga said, “What to say, my friend, when luck forsakes you and when death comes for you, you lose your thinking ability and that is what happened to me.”

As they were talking, with the crow perched on a nearby tree, they noticed that Mandaraka was slowly sauntering and was reaching the clearing.

The crow said to Chitranga and Hiranyaka, “Look, who is coming. Who told Mandaraka to come here? It is such a foolish act. Now if the hunter comes, both of you can run away and I will fly away and it is he who will be caught. Hmm… Such stupidity! Now how do we save Mandaraka from the hunter?”

As they were debating on how to hide Mandaraka since there were no bushes around, the hunter appeared on the scene.

Hiranyaka was cutting the last string of the hunter’s net and in a flash, Chitranga got up and ran for his life. Hiranyaka scampered up the tree nearby. The hunter was stunned for a second but the next moment when he saw Mandaraka plodding his way to safety, there was a wicked smile on his face.

“Aha!” he exclaimed, “I will not go home empty handed after all haha…” he chuckled as he picked up Mandaraka and tied him to his bow and slung him on his back and started walking away.

“Everything in this world seems short-lived” he thought to himself. “And when troubles come, they keep coming in waves affecting the same persons again and again. The only solace during troubles is the sweet thing called friendship, but again now we are losing a good friend…” He was feeling very sad.

Meanwhile the deer and the crow came back and the crow said, “There is no way we can save Mandaraka if we sit here brooding. We have to act fast. Come on, let’s plan.”

He thought for a while and again spoke. “The hunter will have to cross the big pond which is a mile away from here. Chitranga, you run fast through the bushes and go near the pond and lie down as if dead. Hiranyaka, I will carry you and reach there. I will sit on Chitranga, cawing and pretending to peck his eyes while you hide in some bush. The hunter will surely prefer the deer over the tortoise and he will put down Mandaraka near the pond and come to lift Chitranga. Hiranyaka, you have to swiftly cut the strings from Mandaraka’s legs so that he can disappear into the pond. Then when I caw loudly once, Chitranga can get up and run away. Okay?”

“Right” said Hiranyaka and climbed on to Laghupatanaka’s back. Chitranga swiftly reached the farther end of the pond and lay down as if dead. The crow and the mouse soon reached the place and Laghupatanaka sat on the deer and pretended to peck his eyes cawing all the while.

In a short while the hunter reached the pond and was distracted by the cawing and saw that there was a dead deer at the farther end of the pond. He paused for a while and then put the tortoise down and approached the deer slowly.

Hiranyaka darted from the bush behind which he was hiding and started to gnaw at the bow string. Mandaraka’s legs were only tied and so in an instant, he was free. “Slide into the pond, quick” whispered Hiranyaka to the tortoise, and Mandaraka plodded as fast as he could and with a ‘whoosh’ went inside the water.

At the same time when the hunter came very near the crow gave a loud caw and flew away. The next moment, Chitranga got up and darted into the dark bushes and the hunter was so shocked that he had been cheated. Resigned to his fate he turned around to come back and take the tortoise but got another shock that the tortoise was nowhere to be seen. He was aghast and went home feeling betrayed and bitter.

After he had gone away far, the four friends reunited and celebrated.

“This is a lesson to mankind” said Hiranyaka, “that friends who are faithful to each other can never be defeated!”

The four lived a long life thereafter as the thickest of friends.