Sahasra Kavacha – The one with a thousand armours!

In Epics/ Itihaasas/ Puranas and Legends 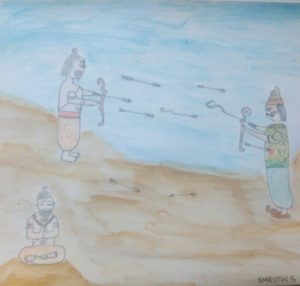 Long long before the period of Mahabharata, there lived a king with demonic qualities by name Dambodbhava. He wanted to become immortal and so started doing penance to propitiate Lord Surya (the sun God). He did arduous penance for a number of years and Lord Surya who was pleased at his devotion appeared in front of him.

“What boon do you seek my son?” he asked Dambodhbhava.

Grinning wide as he was going to get his wish come true, Dambodbhava with his head bowing in obeisance said “Immortality. I wish to become immortal my Lord!”

Surya shook his head much to the chagrin of Dambodbhava. “I cannot grant you that” said he. “In fact no one can be immortal. Any being born in this earth has to die and I cannot change that” said he. “Ask for something else”

Dambodbhava was disappointed but had to think quickly on his boon. So he thought of a complicated boon and asked thus.

“Lord… then let me be protected by a thousand armours on my chest which can be removed only by a person who has done a thousand years of penance to be able to fight with me and he can remove the armour only after fighting for a thousand years with me. At a time only one armour can be removed and the moment the person rips off my armour, he should fall dead!”

Whoa! A super complicated boon to be immortal was sought by Dambodbhava.

Lord Surya who could not refute this as he was not asking to be immortal, granted it. The severity of Dambodbhava’s penance had created a soft corner in the mind of Lord Surya.

Now Dambodbhava was all powerful. A thousand shiny armours sat on his chest puffing up his already proud chest. He came to be known as “Sahasra Kavacha” or one with a thousand armours.

As it happens with all the demons who get such boons, Dambodbhava became intoxicated with the thought that he was unconquerable and started harassing celestial beings, human beings, animals and all forms of life. Such havoc, destruction and chaos was being created by him that all the beings on the earth were cursing him and were wishing for his end. But due to the queer boon he had obtained, he remained unbeaten.

Near Badrinath on the Himalayas, the daughter of Daksha by name Murthi was living with her two sons who were young sages. They were Nara and Narayana who were inseparable brothers and were the reincarnation of Sri Hari (Lord Vishnu). They complemented each other in all activities. It is said that Nara represented the human being, Narayana represented the divine power and human power in unison with divine power is invincible.

Whilst one of them was meditating, Dambodbhava came to their peaceful abode and started destroying whatever was in sight. Nara called out to him and told him to exercise restraint. Dambodbhava in his arrogance not only slighted his advice but called him for a duel. Now, Nara had done a thousand years of penance and started to fight with Dambodbhava and the fight went on and on and on for a thousand years. At the end of it Nara pierced the first armour of Sahasra Kavacha and the next moment he fell dead as per the boon given by Lord Surya.

A gleeful Sahasra Kavacha giving out a thunderous roar of victory turned around only to be shocked by what he saw. Nara was up and about and there was another similar young sage ready to fight with him. He did not know that by doing penance for a thousand years, Narayana had mastered the Mrita Sanjeevani mantra and with the help of that brought Nara to life and there, Nara was going to meditate while Narayana fought with Sahasra Kavacha. Again for a thousand years, Narayana fought with him and at the end removed the second armour and dropped dead, only to be brought back to life by his twin brother who took over the fighting as Narayana went to meditate.

This went on over and over again till nine hundred and ninety nine armours were removed. With just one armour left, Dambodbhava sensed that his end was near and ran to Lord Surya seeking asylum with Nara and Narayana in hot pursuit. Lord Surya could not refuse asylum to a devotee who had surrendered himself seeking refuge though he was such a horrible being. Much against his own wishes, he absorbed Sahasra Kavacha into his self thus saving Sahasra Kavacha’s life.

But try as he might, the demonic qualities of Dambodbhava were troubling Surya and he wanted to get rid of him at the earliest possible opportunity. This was the opportunity when Kunti called him to give her a son. Sahasra Kavacha was reborn thus as Karna with the last remaining armour of his and earrings. Krishna and Arjuna were Narayana and Nara reborn and thus the enmity continued till Karna was vanquished on the battlefield. It was because of Sahasra Kavacha’s boon that it became extremely necessary that his armour had to be removed prior to killing him or else Arjuna would have fallen dead the moment he killed Karna. Karna’s character was a mixture of good and bad since in spite of being a demon, he had resided in Surya for quite some time. So even though Karna’s actions like when he lied or instigated his friend to disrobe a helpless woman in public earn the ire of the people, he was endowed with the good qualities of bravery, being faithful to his friend ever and above all charity to people irrespective of their standing or status (just like the Sun) and indeed it was this quality that helped bring about his end in the Mahabharata War.

This is the story of Sahasra Kavacha.