The Legend of Madurai

In Epics/ Itihaasas/ Puranas and Legends, Stories related to places 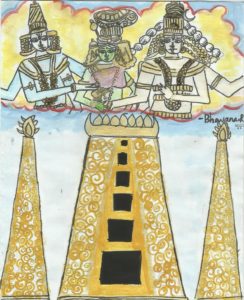 Today is the start of the new year for Tamils and in this Chithirai month, I am going to narrate the legend of Madurai which is synonymous with the Chithirai Festival!!

The city of Madurai is believed to be in existence for over thousands of years – one of the oldest living cities in the world. It is said that Megasthenes, the Greek historian visited this city when he visited India in 302 BCE and has mentioned about “Pandaie” and “Methora” which are interpreted as “Pandya” and “Madurai”

This city was the capital of the Pandya kingdom for centuries and was taken over by the Cholas during the tenth century CE. Later it was regained by the Pandyas. Afterwards, it came under the rule of the Vijayanagara Empire and one of the chieftains of the Vijayanagara Empire, Tirumalai Nayaka who ruled from Madurai added glory to the city by building new structures and enhancing the beauty of the temple by expanding it. He is credited for building the Pudumandapa, which has lot of sculptures, the huge artificial pond (Teppakulam) and the Perumal Temple at Tallakulam, Madurai.

We will see the story of how Madurai came into being.

Legend has it that Lord Indra who was suffering from a curse, came to the earth and was wandering about searching for peace of mind. When he reached a particular spot which had lot of Kadamba trees, he saw a Shivalingam and his mind was filled with strange bliss. He found a pond with golden lilies and started to worship Lord Shiva there. A merchant who was going by noticed this and reported it to the King Kulasekara Pandya. The king with the help of Indra and the divine architect Viswakarma, built a beautiful temple for Lord Shiva and a city around the temple. These structures and the city were blessed with drops of nectar from Shiva’s locks and therefore the name Madhura (Sweetness).

Madurai has also been referred to ‘Tiru Aalavai’. It seems that there was a great deluge in the second Sangam period wherein the city was destroyed excepting for the temple and four hillocks and the then king prayed to Lord Shiva to help him rebuild the city by showing him the borders of the city as it existed before the deluge. Shiva obliged and the snake worn as Shiva’s bracelet went around demarcating the city. Therefore, the name “Aalavai” which translates to ‘the mouth of poison’.
(Tirugnanasambandar has sung the “Tiru Aalavai Padigam” when he visited Madurai).

King Kulasekara who built the temple thus, had a son by name Malayadwaja Pandya. King Malayadwaja and his wife Kanchanamala Devi had all the treasures except children. They prayed for an heir for long and performed a ‘Yaga’ seeking divine blessing for begetting a child. To the surprise of one and all, a young girl of three years, dressed in fine silk and bedecked with ornaments, came out of the fire of the ‘Yaga’ and went and sat on the lap of Malayadwaja. There was a divine voice (Ashareeri) informing the audience that this was a divine child who had come to rule Madurai. “Treat her like you would treat a son and teach her all the skills you would impart to a son”.

The royal couple were overjoyed, but soon found that the child had three nipples which was abnormal. As they were concerned on this, the voice further went on, “this girl will have three breasts. However, the third breast will vanish the moment she sets her eye on her suitor”.

The king and the queen were extremely happy and felt blessed with this happening. They named the girl Tadaathagai Piraatti. She was also known as Meenakshi as her eyes were beautifully shaped like fish. (Meen – fish, Akshi – eyed). Meenakshi was soon the darling of everyone in the kingdom. As instructed by the celestial voice, Malayadwaja imparted all the skills to her right from music and art to horse riding and warfare and she picked up everything with equal alacrity giving immense joy to her teachers.

In course of time Malayadwaja Pandya died and Meenakshi was crowned as the princess and was ruling the kingdom.

After some time, she asked permission from her mother to conquer all the kings and expand the kingdom. With the permission of her mother, she set out with her army conquering all the neighbouring kingdoms. Thereafter she proceeded north.

On reaching Mount Kailasha, she demanded to see the Lord Shiva.

“You cannot see him. You will have to fight us first “said the bhootaganas (the attendants) of Lord Shiva. Effortlessly Meenakshi vanquished them and as she was advancing, she was confronted by none other than Nandi, the Lord’s bull. He was no match to Meenakshi’s prowess. Lord Shiva then came out to see what the commotion was all about.

When Meenakshi turned around to see Lord Shiva, her third breast vanished, and she knew that he was her suitor.

Meenakshi’s general Sumathy was also aware of the prophecy and requested the Lord to come to Madurai to seek the hand of Meenakshi.

The Lord accepted their request and assuming the most beautiful form of Sundara Easwara (Handsome lord), Shiva traveled all the way to Madurai to meet the queen Kanchanamala. The queen mother was so happy to have Lord Shiva as her son-in-law and so the wedding took place with great pomp and gaiety. All the celestial beings rushed to Madurai and Lord Vishnu, the brother of Parvati (Meenakshi) gave her hand in marriage to Sundareswara.

During the wedding feast one of the dwarfs ‘bhootaganas’ of Lord Shiva, by name Gundodhara became very thirsty. No amount of water would satiate his thirst. All the water in the city was brought in all sorts of utensils but Gundodhara’s thirst could not be quenched. Lord Sundareswara asked him to cup his hands. He ordered him “Vai Kai” which means ‘keep your hand’ and the next moment Ganga in the matted locks of Lord Shiva surged and flowed through Gundodhara’s hand and thereafter his thirst was quenched. This water is said to have turned into the river Vaigai.

The couple stayed back at Madurai with Goddess Meenakshi and Shiva as Sundara Pandya, ruling the kingdom. They were succeeded by their son King Ugra Pandian who is believed to be an incarnation of Lord Kartikeya.

These events which are stated in the Tiruvilayadal Purana are being enacted at the temple at Madurai every year during the Chithirai festival. This festival used to be mainly celebrated by the Saivites.

In Madurai, there was another Vaishnavite festival celebrated in another monthat a place called Thenur near Madurai.

When King Tirumalai Nayaka was ruling Madurai in the seventeenth century, he wanted unity between Saivites and Vaishnavites and therefore merged the two festivals into one and celebrated it in the Tamil month of Chitra (Chaitra in the other parts of the country). The festival came to be known as ‘Chithirai festival’. By doing this he facilitated the people to be together and celebrate together. This was something akin to the Ganapati festival in Maharashtra where the objective is more of bonding and celebration.

You can read the story in detail here.

Glossary :
Bhootaganas – are lieutenants of Lord Shiva having strange figures, sometimes huge, sometimes dwarfed figures with long teeth, big faces, some with big bellies, long nails etc. They are supposed to be the attendants of Lord Siva. They have terrifying forms.

Sangam Period – Is denoted as the period from 2nd Century BCE to 3rd Century CE when major literary works were composed by numerous poets which included the Tholkappiyam which is the oldest surviving treatise on Tamizh grammar.