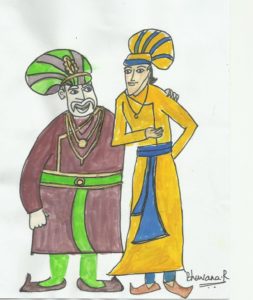 Birbal was one of  the gems of Emperor Akbar’s court. He was one of those persons who could give a solution to any sort of problem which is why Emperor Akbar liked him so much.

We have heard of many instances where Birbal came to the rescue when justice had to be delivered. People preferred to go to Birbal rather than going to the court when they had a problem or case against somebody. This is yet another story of Birbal’s intelligence.

Once there was a person by name Shaam in a village near Agra. He had purchased a piece of land from his neighbour Mangat Ram. The piece of land had a well on it and Shaam had paid the purchase price in full and also registered the land in his name mentioning the presence of the well in the document. He had fenced the land and put a small gate with a lock.

The day after the purchase was over, Shaam heard a knock on his door. On opening the door, he found Mangat Ram standing outside with many drums of varied sizes. To the puzzled Shaam, Mangat Ram said, “I have come to take my water from the well and from tomorrow, give me a duplicate key to the lock you have put for the land, so that I do not have to disturb you to take my water”.

Shocked, Shaam asked, “But Sir, I have purchased the well from you by paying cash. So where is the question of your water? If you want, take water today, but I cannot allow you to take water from the well everyday as a matter of right!”

Mangat Ram, furious at Shaam’s reply said, “How dare you say that I cannot take water huh? I have sold only the well to you not the water okay? Show me where in the document is it written that I have sold you the water in the well? Don’t try to act smart!”

“Act smart?” thought Shaam. Who was acting smart? He did not feel like arguing with Mangat Ram as he knew that it would lead to nowhere. Gathering his wits Shaam said, “Mangat Ramji, it is okay if you take water today, but I want to take this matter to Birbalji for a solution. Of course, you have not mentioned the water in the well in the sale agreement, but then maybe it has to be included and I wish to meet Birbalji in this regard”.

Mangat Ram thought for a moment and said, “Theek hai, we will meet Birbalji tomorrow and I am sure he will agree that I am right! I will come to his house at 5 in the evening.” Birbal used to meet people in the evenings if his help was required by them to solve such issues. Mangat Ram was very sure that Birbal could not ‘dispute’ his version of the ‘ownership’ of the water in the well.

Shaam was worried the whole night, though he knew that he would get a just decision from Birbal. Anyhow, he thought he should apprise Birbal of the case beforehand and went to meet him in the morning.

Birbal gave Shaam a patient hearing and said, “Do not worry. I will see you in the evening. Go and take rest”

The anxious Shaam, left the place a wee bit relieved.

It was evening and both Shaam and Mangat Ram were present in the courtyard of Birbal’s mansion. Shaam was tensed up, while Mangat Ram had a cunning smile on his face.

Birbal came and signalled to them to sit on the benches there. Looking at Mangat Ram he said, “Yes, Sir, tell me what brings you here”.

Happy that he was given the chance to speak first, Mangat Ram told Birbal of how he had sold the patch of land with the well to Shaam, but had not sold the water in the well and therefore, he was entitled to take any amount of water at any time of the day from the well.

“Am I not correct Huzoor?” he asked with arrogance. “I never promised to sell the water to Shaam. Ask him if you want!”

Birbal looked at Shaam and asked him, “Is it true that Mangat Ram did not sell you the water?”

Almost in tears Shaam said, “Huzoor, I never imagined that a person would sell only the well without the water in it. I bought the land with the well only because there was copious water in the well and I could irrigate the land with that. I have paid lot of money for the purchase by mortgaging my wife’s jewels. Now what is the use of the well without the water? I feel Mangat Ram is being unjust. I plead that you may deliver justice”

Happy, thinking that the case was moving in his favour, Mangat Ram, with a wide grin said, “Ha ji Huzoor, the well belongs to Shaam only. The water alone belongs to me!”

After a moment’s silence, Birbal, clearing his throat said, “Well, I understand that the well belongs to Shaam but the water belongs to Mangat Ram and the water can be kept only in the well. So…, Mangat Ramji, it is only fair that you should pay rent to Shaam on a daily basis for him to let you keep your water in his well. The rent can also be fixed right away. Is it not Shaamji? How much rent do you expect?”

Mangat Ram was in for a shock. He did not in the least expect that the issue would boomerang in this manner on him.

Hurriedly he said, “Huzoor, Shaam and I are very good friends and we will fix the rent mutually. I have to leave now as I have to meet a friend. Namaste!” He walked out of the place without turning back!!

Shaam had no words for Birbal. Overwhelmed by the simple, yet the best solution that had sent his foe running, all Shaam could do was to hold the hands of Birbal with tears of gratitude streaming down his cheeks.

“Thank you so much Huzoor, thank you …thank you… “was all that he could say as Birbal looked at him with the satisfaction of having saved yet another naive citizen from the clutches of a greedy fellow.